The members of DPS Officers Association are not unlike the citizens of any Texas community and often experience the same hardships and trials common to everyone. It is at just such times that this unique DPSOA assistance program reaches out to support its members. Whether a natural disaster, a personal hardship, or medical emergency our members are eligible to receive relief funds. This program is available at the discretion of the Board of Directors, and provides immediate aid for the use of DPSOA members.
More than $462,191 has been given

Support For Trooper Chavez and Family

The check was given in the name of the DPSOA membership to help defray expenses incurred in connection with the hospitalization of Trooper Chavez’ infant daughter Mia Isabella. Mia was born with a congenital heart condition that required extensive hospitalization and constant care at the Texas Children’s Hospital in the Houston.

Hurricane Ike was the ninth named storm, fifth hurricane and third major hurricane of the 2008 Atlantic hurricane season. It was a Cape Verde-type hurricane, as it started as a tropical disturbance off the coast of Africa near the end of August, then tracked south of Cape Verde and slowly developed. On September 1, it became a tropical storm west of the Cape Verde islands.

Many of our Troopers and their families have experienced damage to their homes and property loss from hurricane Ike. DPS Officers Association has been quick to provide assistance to our members in the form of financial support, approximately $8400 as of September 23, and $2000 in mission specific clothing. DPSOA will continue to respond to member’s requests for help.

Trooper inspecting a barge left high and dry by Ike.

Glad We Could Help

Lieutenant Estella D. Valenzuela resides in Midland, Texas where she is assigned to the DPS, Driver License Division. She is pictured with Texas Rangers Captain Barry Caver, (Retired) receiving a check from the DPS Officers Association to help defray significant medical expenses incurred in her battle with cancer. The DPS Officers Association was happy to have the opportunity to help the Valenzuela family in light of the many hardships they faced.

The good news is that Lt. Valenzuela was recently declared cancer free, following a series of tests that included a CT scan and bone marrow biopsy. Through these difficult and uncertain times Estella felt very blessed by the help of family, friends, and DPSOA.

Assistance to troopers and their families in a time of need 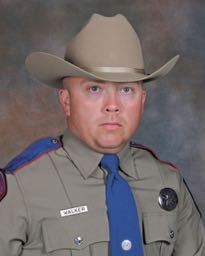 Trooper Chad Walker was ambushed while responding to a motorist assist in Limestone County near Mexia, Texas on March 26, 2021. Trooper Walker succumbed to his injuries on March 29, 2021.  Trooper Walker was a member of B-2015 recruit school and a Trooper in the Texas Highway Patrol. The Texas DPS Troopers Foundation raised over $250,000 for the family to help with financial needs 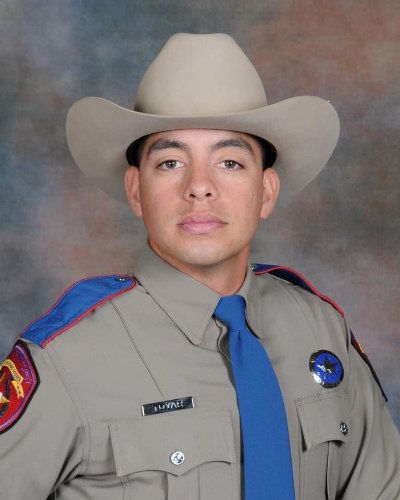 On April 8th, 2021 for unclear reasons, an employee of the Kent Moore Cabinet Company in Bryan, Texas opened fire with a handgun on his co-workers which resulted in the death of one individual and the serious injury of several others. Officers from multiple agencies, including Texas DPS, responded to the scene to provide assistance, but the suspect had escaped from the area prior to police arrival. Fairly quickly, a white male suspect in the shootings was identified and it was determined he resided in neighboring Grimes County.

Texas Highway Patrol Troopers, DPS CID Special Agents, Texas Rangers, DPS Aircraft, and our local partners began to move toward the community of Iola in Grimes County in an attempt to locate the suspect to prevent further harm to innocent civilians. Trooper Juan Tovar (THP Madisonville and B-2018 Academy graduate) heard the call and immediately responded from Madison County to Grimes County. Trooper Tovar intercepted the suspect near his residence and the suspect immediately opened fire on Trooper Tovar with a semi-automatic rifle. Trooper Tovar’s vehicle was struck thirteen times as he quickly attempted to reverse a long distance out of the area while returning fire on the suspect. Unfortunately, during the firefight, Trooper Tovar was struck in the left eye with a rifle round which had penetrated his patrol vehicle’s windshield. Other Troopers and local deputies immediately rendered aid and Trooper Tovar was ultimately airlifted to St. Joseph’s Regional Medical Center in Bryan in serious but stable condition. He was conscious and talking with family and co-workers at the hospital prior to being sedated to stabilize his wound and condition. The suspect was apprehended by fellow Troopers a short time later without additional incident.  The Texas DPS Troopers Foundation has raised over $53,000 to assist the Tovar family with their financial needs.