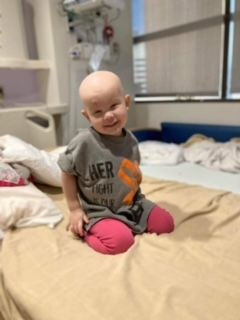 Trooper Wilson (2B08 Orange) and his wife Danielle’s daughter, Jade, was diagnosed with stage 4 Neuroblastoma at 9 months old in March of 2020 and went through several chemotherapy treatments that year to achieve remission. After multiple follow up scans and tests regularly for a year, they thought for sure they were in the clear and had beat this thing. Unfortunately, Jade began to get sick often with multiple viruses and illnesses in March of 2021, and after an ER visit and a trip to Texas Children’s Hospital, she was diagnosed with treatment related B-cell Acute Lymphoid Leukemia. They were told it was caused by the chemotherapy she received to beat Neuroblastoma, which in and of itself was only a 3-4% chance of getting. Their worlds were turned upside down in an instant and they were in complete shock that their daughter now had a second cancer just before her 2nd birthday in May. After certain genetic testing of her specific leukemia, the doctors decided that a bone marrow transplant would be her absolute best shot at a 100% cure.

They began treatment to get her into remission before going into bone marrow transplant which took roughly 2 months. She went through a lot of chemo and steroids that put her through many challenges. They were admitted to the bone marrow unit on July 12th, thankfully with a 100% matched donor ready to donate her stem cells. Jade’s transplant took place on July 23rd, after 8 days of really high doses of chemotherapy that made her very sick and weak. She had several complications post transplant that kept them admitted for over 2 months, and is currently still battling mouth ulcers and is still not interested in eating food. She’s on several medications to help with pain, prevent infections, rejection and to keep her comfortable while still recovering from the chemotherapy she received. They go to appointments 3 times a week, and she is still getting her nutrition through her IV every night until she decides to eat food.

She’s gone through many stages in her short life but they try and enjoy each stage they go through with her and support her through everything that they can so they can have a healthy little girl soon. Her little brother is due to be born in less than a month, and so that will be its own challenge with everything going on with Jade. They are temporarily living in Houston to be close to the cancer clinic while Jade is being seen. Danielle is an RN and has been out of work since Jade’s first cancer, to take care of all of her needs and appointments. Shane is currently taking family medical leave from his job to be with them and help with Jade’s care and soon to be newborn. It’s been a tough two years, they appreciate the support and love they have received throughout her journey. They want so badly for her to be well soon and continue to heal and recover.

Any support, kind word or donation helps their family so much and they are very thankful for their community of friends, family and coworkers who have come together for them. If you would like to donate gift cards for food, they like Chick Fil A, Whataburger, Taco Bell, McDonalds, Torchy’s Tacos, Mod Pizza, and Chipotle. If you would like to give a monetary donation, I am accepting for them on Jade’s behalf. You can mail to Teresa Millican, Texas Dept of Public Safety, 7200 Eastex Freeway, Beaumont, Tx 77708. Donations will also be accepted via Help a Hero, PayPal (@TraciMILLICAN) or Venmo (@Traci-Millican). For any further questions as to how you can help, contact Traci Millican at 409-924-5466. Thank you in advance and please keep our Trooper and his family in your prayers.