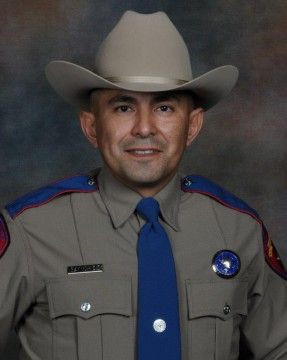 At approximately 8:45 p.m. on April 6, 2019, Trooper Sanchez approached a two-vehicle crash scene in Edinburg. The driver of one of the vehicles fled the scene and later shot Trooper Sanchez. The suspect was captured and will now face the charge of Capital Murder.

In the months following the shooting, Trooper Sanchez and his family received an outpouring of support by countless members of the public, fellow law enforcement partners and hospital staff. The department remains extremely grateful for their generosity and support.

“Today is an extremely difficult day for Texas, as we have lost one of our finest, Trooper Moises Sanchez,” said DPS Director Steven McCraw. “Trooper Sanchez demonstrated great strength and bravery as a Texas Trooper, and we will honor his selfless service and sacrifice forever. Our DPS family is deeply saddened by his passing, and we’re asking for continued prayers and support for Trooper Sanchez’s wife and three children as well as his countless friends and colleagues during this difficult time.”

Following extensive physical therapy and another operation in August, Trooper Sanchez succumbed to his injuries. Had been stationed in Palmview prior to the incident, and was 49 years old.

If you'd like to make a donation to the Texas DPSOA so that we may continue to support our officers and their loved ones, please visit HERE.